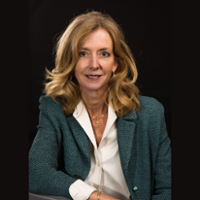 Over the past 30+ years, Kellie has had a front row seat to – and played an active role in – some of the country’s most controversial and culture-changing initiatives: in the late 1980’s, with Ogilvy & Mather, she helped to calm a confused and divided populace through the “America Responds to AIDS” campaign. In the 1990’s, she helped businesses leverage the Internet and compete in the nascent digital economy. Later, as part of a national advocacy campaign for Tobacco-Free Kids, she handled media relations for whistleblower Jeffrey Wigand, who was later played by Russell Crowe in the movie, “The Insider.”

In the years that followed, she consulted independently or was contracted by DC area firms to develop and implement communications strategies for clients that included Johnson Controls and PriceWaterhouseCoopers; the Veterans Administration and the Small Business Administration; the American Medical Association and United Fresh Produce; and The Conservation Fund and the American Red Cross.

Since co-founding Boyle Public Affairs in 2011, Kellie has built and led teams of experts in creating and executing integrated marketing and advocacy campaigns on behalf of public and private sector, nonprofit and association clients.

Kellie graduated from the University of Delaware with a B. A. in public relations and political science. A frequent TV guest and source for stories on higher education issues, Jim became a recognized expert on education technology, finance and politics as the former president of College Parents of America and the vice president of brand marketing and corporate communications at Sallie Mae.

Throughout the 1990’s, Jim served as Senior Vice President, Corporate Communications for Discovery Communications, Inc., during a time of rapid domestic and international growth (from an asset value of less than $100 million to greater than $1.2 billion). There, he headed both internal and external communications, greatly contributing to reputation management of what became the world’s most respected media brand, Discovery Channel.

In the late 1980s, as employee #17 at CNBC, Jim created the corporate communications and community relations function for NBC’s first venture into cable television.

Jim began his public affairs career as a press secretary on Capitol Hill, where he served as chief spokesperson for two members of Congress. A native of Detroit, Jim holds a B.S. in Communication Studies from Northwestern University, where he was a National Merit Scholar.